In September this year I was fortunate to travel around California for the best part of a month, and I was looking forward to the holiday as a period to take time out and reflect on the big questions I felt life was asking me.

It’s the longest time I’ve travelled and I was able to take so long because, as a result of the continuing public sector cuts, I was offered voluntary redundancy. After five years at the same place the time felt right to move on and I saw it as an opportunity. But needing to take potentially life changing decisions naturally caused me to question… What do I really want to be doing? Where do I want to be heading? What am I doing with my life??!

We flew into LA, driving for hours through hellish traffic to arrive at Joshua Tree national park in the dark, grateful to find a free space at the Hidden Valley campground. Our headtorches illuminated the bulk of the boulder-like formations that the camping spaces nestled beneath.

We were woken by coyotes howling, one group yelping frantically nearby and another replying from somewhere in the distance. It was 6am, but with an alarm call like that there was no way we were going back to sleep. The sun had just come up, and looking around at the unfamiliar rocky landscape I felt I had travelled to another planet.

Scrambling to the top of the tall ridge that formed the far side of the campground, I looked back down and saw an expanse of white sand and pale yellow-white granite. Over the other side lay a vast and perfectly flat plain crowded with the Joshua Trees themselves, their unusual shapes poised like joyful dancers.

Joshua tree is beautiful and like nothing I had ever seen, and as the sun rose, the mountains on the horizon glowed a deep wild-salmon pink. 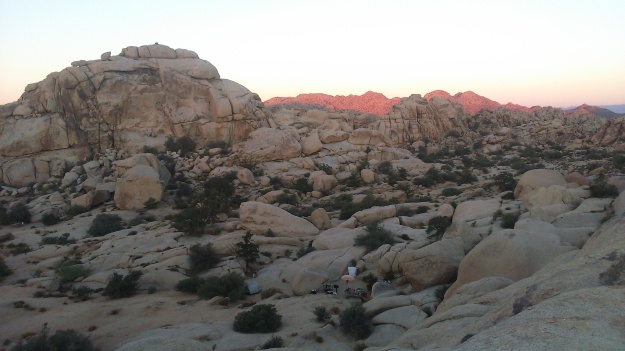 Tiny campers nestled in the rocks, and a red sunrise

When you’re car camping in California, life is simple. Finding it too hot in the south, we travelled up Highway 395 through Inyo County, the High Sierra mountains always visible to the West. Passing through Bishop, Mammoth, and on to Yosemite National Park, we stopped off at Pleasant Valley, Twin Lakes, and Tuolumne Meadows campgrounds.

The days assumed a rhythm that started with the ritual of coffee. I love that solitary time in the morning before most people wake up, listening to the muted blaze of the stove for the moment that the pot bubbles announcing the arrival of coffee. The day seems suspended in that moment of waiting, perfect in its possibilities before caffeine catapults me into action.

Each day we would climb, locating new crags, navigating walk-ins, and tackling the routes. Or I would hike, almost disbelieving at the start of the day that I really would be at that highest point of the horizon, and back again before dark. As darkness fell the various climbers, boulderers and hikers would reconvene at the campground to hear about each other’s days and plans for the next day. Food and drink tastes better when you’ve earned it, and as we clustered around the blue stove flames to cook we savoured the taste of local brewed ale, inventing ingenious ways to remove the bottle tops.

Some nights the milky way would appear bright in the clear sky, and I watched its rotation feeling insignificant, peaceful, and incredibly lucky. As each day started with coffee, it ended with making the beds, another ritual which involves clearing the back of the car and making sure the roll mats are smooth, creating pillows out of down jackets, laying out the sleeping bags in the exactly the right position. And then – glorious sleep. 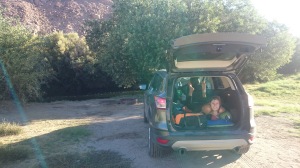 Moment by moment by moment, I was absorbed. I didn’t think about the future, or worry about what might or might not happen. As a way of living, it felt so simple and so pure, focusing all my attention on each event in my day as it happened. I know it’s not possible to be on holiday constantly, I don’t want to run away from my life and become a rootless traveller. There’s a danger in living for future plans, as much as there is in living in the past.

I went away thinking that time out would give me perspective, and I came back wanting the opposite of escapism. I want to be present right here, right now. Too much reflection can become a distraction, so maybe I did find the answer to the big questions… stop questioning.