Sea cliff climbing feels like a proper adventure, but you don’t have to commit to hard routes to have an amazing day in beautiful locations. A long weekend gave me the chance to discover a little taste of what Pembroke has to offer…

Pembroke is a good five hour drive from the Peak District, and I was glad to leave the busy motorway for South Wales’ winding country lanes. Our journey finally ended as far west as it is possible to go, in St Davids, Pembrokeshire, a county that is bordered by sea on three sides. On the very edge of the country where the last of the land drops away are the sea cliffs that we were there to climb.

Day 1 – We started at Craig Caerfai, only 600 meters from the car park it has an incredible view across Caerfai Bay. The descent runs down a gully at the corner of the cliff, and we set up an abseil using stakes driven into the cliff top.

As I lowered myself to a platform of rock washed at the edges by the incoming tide I felt aware that I had to be sure I could climb back out, but the limestone was warm and the routes are short and friendly. It’s a perfect introduction, and we ticked as many as we could before the sun began to set. 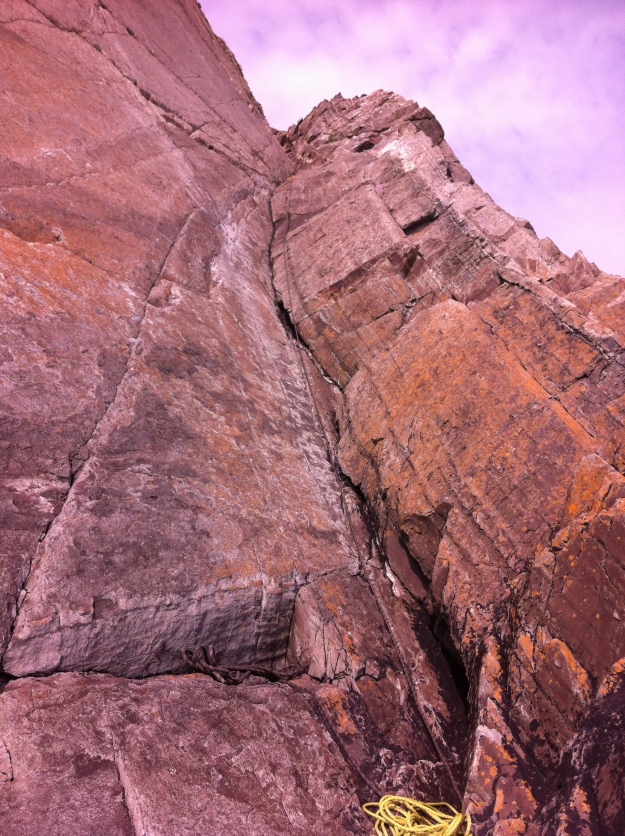 Day 2 – We headed to Porth-y-FFynnon, a tiny purplish sandstone slab a few hundred meters from the campsite. As we set up the abseil it began to rain, and we were forced to admit that the slab was just too wet to climb.

We dashed to south Pembroke to chase drier weather, choosing an area that would not be affected by the afternoon high tide. Stennis Head was the only crag of the weekend that involved a short scramble rather than an abseil in. Starting from a sloping ledge well above the sea, we had time to enjoy a couple of routes including a short but interesting traverse under a mini roof.

View from the top of Stennis Head

Day 3 – We made our way Stuntsmans Buttress where I was keen to lead a route called Myola. I was excited to commit to a route I hadn’t even seen and enjoyed the abseil to an otherwise inaccessible niche in the rock. The route follows a long diagonal groove from sea level right to the top of the cliff. As I waited in the niche I had time to absorb the unique position, surrounded by nothing but rock and sky, waves breaking beneath me as the tide rushed in over bleached white boulders.

As I started to lead the position felt a little intimidating, but the climbing itself was never too hard and the whole experience was incredible. The next route involved tricky route finding, sparse gear and tiny limestone edges – great climbing and perfect for me to second.

Rusty belay Stake at the top of Stuntsman’s Buttress 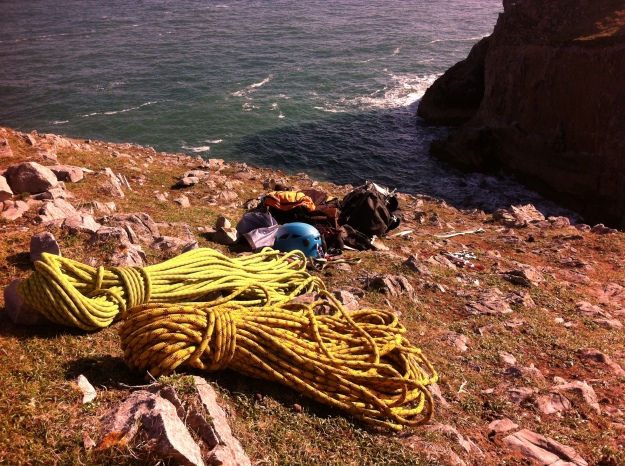 Relaxing in the sun with the gear after Myola and Myopia, Stuntsmans Buttress

Feeling the need for a little relaxation we walked over to investigate nearby Saddle Head which has a selection of lower grade routes and a totally different feel. There were crowds of people, but it was a good choice for a quick and easy route to end the day.

Day 4 – Our final day was spent at St Govan’s Head, the most popular area to climb in Pembroke and it’s easy to see why. There are so many routes we were spoilt for choice, but as time was limited we decided on the top 50 classic route Army Dreamers. It starts with steep juggy climbing, followed by a short thin traverse to a pumpy technical section up a thin crack. It was the best route of the weekend, and as well as offering fantastic climbing, there are some beautiful ammonite fossils on the route. 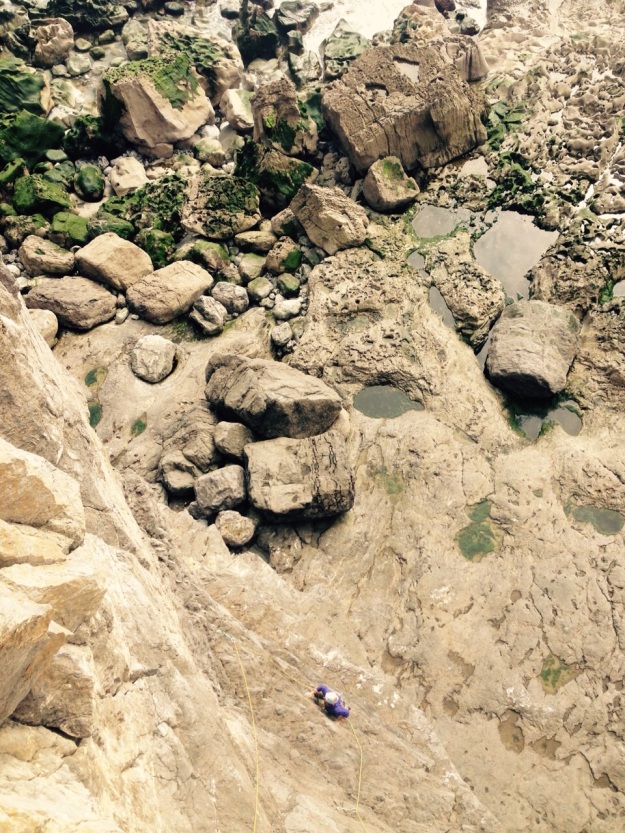 Anna waiting to second by the rock pools at St Govans

The variety of climbing combined with camping in lush green fields with a sea view makes Pembroke a perfect location. The trip was a great introduction to the area, and I can’t wait for the chance to get to know it better.